On June 10 our new Officers were installed. This will be a year of challenges and benefits to the community. In September we will begin work on the major project(s) that our committee is about to recommend to our next regular meeting.

The Club has decided to shift into high gear in helping the Ottawa and Kanata communities with our labour and our fund-raising proceeds. We have been in touch with several worthy causes and with our neighbours to establish a great plan. September will be the starting point of the roll-out.

New President, Peter Henry, believes that the year will feature challenges but that we will get it done. 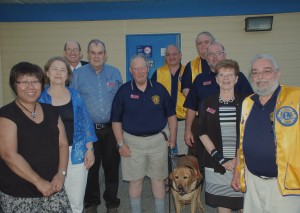 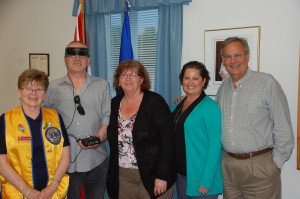 Lion President Peggy Feltmate poses with Phillip Godfrey,recipient of an e-Sight apparatus that has taken him from severe disability to virtually perfect vision. They are joined by Phil’s wife Colleen, Carolyn Bradley and Bill McPhee.

May was certainly “vision month” for the Kanata-Hazeldean Lions. On May 28,  Phillip Godfrey and his wife, Colleen, along with Bill McPhee, CEO and Carolyn Bradley, Client Relations Specialist of e- Sight Eyewear visited us . As a result of a $500 donation from our Club along with another $1400 donated by Clubs in our District and a $5,000 donation from a Toronto based charitable organization, Phillip was able to afford to purchase one of the vision enhancing systems produced by e-Sight eyewear here in Ottawa.

Bill McPhee described the system and its development, Carolyn described some of the support services provided by the company to more than 100 recipients to date, and Phillip described the life changing impact of this device on him. Phillip recently immigrated from the UK when he was struck with Lebers’ disease which reduced his vision from 20/20 to 20/400. With the e-Sight system in place, he is now able to enjoy 20/20 vision once more. 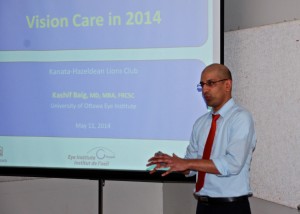 On May 13, Dr. Kashif Baig of the Ottawa Eye Institute of the University of Ottawa wowed Lions and guests with his description of the latest wonders in surgery and research at the Institute.

The Institute is one of a number of organizations that we are considering in our Major Projects planning.

Residents will have an opportunity on Tuesday, May 13, to meet one of Ottawa’s foremost experts on current vision issues and the work of the University of Ottawa Eye Institute in vision research and treatment.
Dr. Kashif Baig, will attend the Kanata-Hazeldean Lions Club’s meeting on the 13th at 7 PM.
Dr. Baig is a Cornea, Anterior Segment, and Refractive Surgeon at the Eye Institute. He is an Assistant Professor at the University of Ottawa, Cornea Consultant at the Children’s Hospital of Eastern Ontario, Principal Investigator at the Ottawa Hospital Research Institute, and Director of Clinical and Research Fellowships in Cornea, Anterior Segment, and Refractive Surgery.
. Given the importance and interest of this topic, and given their longstanding commitment to vision care, the Lions are inviting residents as well as members to the session.
Dr. Baig will speak about current visual issues and will describe some of the exciting prospects in research at the Institute and elsewhere in the world. He will also describe the treatments available, including modern surgical techniques, to respond to vision disorders, injuries and diseases.
Dr. Baig will answer questions and generally participate in a conversation with those who attend the meeting.

The meeting will take place at the Lion Dick Brule Community Centre in the Lions Den, 170 Castlefrank Road, Kanata. The doors will open at 6:30. For further information call 613-591-3609 or email toddsloan@me.com 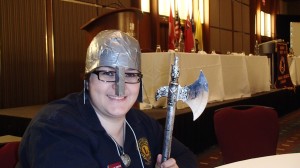 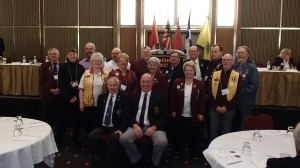