A big thank you to Bill Lumley of Bill’s Cabinets (http://billscabinets.com/) here in Kanata. During the recent “spring” cleaning of the Kitchen, it was noted that there was a large (1/2 inch) gap between the kitchen cabinets and the ceiling. A photo was taken and sent to Bill Lumley for his comment and he strongly recommended repairs to stabilize the cabinets. Bill had supplied the cabinets five years ago when we renovated the kitchen, however he did not install them.

On March 20th, Lions Bill Switzer and Tom Feltmate met Bill at the Lions’ Hall – it turns out that both Bill’s were employees of Nortel at the same time – I thought the work would never get started as Lion Bill and Bill had to reminisce about old times and old friends at Nortel. However….once Bill pulled out his special cabinet jack, it was not long before the cabinets were once more flush with the ceiling, all connections tightened and screws added at the bulkhead to make sure things will stay in place.

At the end of a couple of hours work, Bill announced that, as we are a community service organization, he was not going to charge us for the call or the work done.

Yes…Lion Bill did give Bill a brochure encouraging him to consider joining one of the finest service organizations in the world!!

On March 26 Lions from Almonte, Arnprior, Richmond, Ottawa West, Kanata-Hazeldean and Stittsville will meet at the Stittsville Club to hear from our Governor, Tony Lawson, about Lions service in the district and around the world and to share some fellowship – plus a great home-made meal! 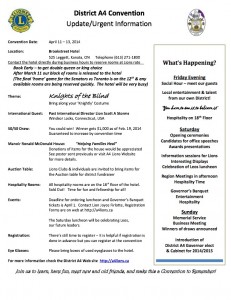 On February 11 we greeted speakers from this organization, which matches individuals with disabled folks to permit the latter to better integrate with the community. We learned about how we and our neighbours could support CAO financially and otherwise.

Our club will be examining ways that we might help out and encourage people in our area to do likewise.

Thanks to Gail, Peter and John for an informative evening.